Here at TrekkSoft, the tourism market continues to fascinate and surprise us. With our annual Travel Trends Report and surrounding content, we publish the data on travel that we want to read, and have drawn on our own research as well as interviews with experts to provide you with new insights and opinions.

Our focus is on the experiences that are inspiring consumers to book trips and see the world, as well as the markets behind these and the powerful industry shifts in the background.

Travel all comes down to experiences

Experiential travel is a form of tourism in which people focus on experiencing a country, city or particular place by connecting to its history, people and culture. And it's a key tourism trend for 2018.

"Travel is about the people we meet. It's about who we are and what we want to do. Is it food experiences? Active outdoor pursuits? Experiencing different cultures? Travel is about what you do and who you experience it with". – Olan O’Sullivan, CEO of TrekkSoft

People report being mostly frustrated before the planned purchase of a thing, but mostly happy before they bought an experience – like a trip or an activity.

"Travel providers need to remember that at the heart of guest experience is the experience part". – Jon Fauver, Co-founder of TrekkSoft

As the Guardian says: "There is science behind it, but it’s also very simple: regardless of political uncertainty, austerity and inflation, we are spending more on doing stuff, choosing instead to cut back on buying stuff".

What experiences are travel consumers looking for?

For our Travel Trends Report 2019, we analysed the TrekkSoft tour & activity companies that were driving the most bookings. Here are the types of experiences that kept coming up in the list of top companies:

1. A request for unique experiences

"Our guests are looking for an authentic river experience. They want to get off the beaten track with an expert tour guide, a small group, and with safety and quality first".
– Les Rives Authentic River Experiences

Tour operators are now receiving requests for unique experiences from travellers who want to do something that is a once-in-a-lifetime. This is becoming more common amongst Millennials who want to explore the world and share their stories with others.

2. Ecological tours are in demand

Ecological tours are the most popular tours offered by many tour & activity operators who responded to our 2018 Tourism Survey. These are usually rare experiences that educate and share inside information on the area, and how to protect it for the future. Tours that use proceeds to fund ecological projects such as forest or animal habitat restoration are chosen above alternatives without a cause. Ecological

Travellers are choosing to become more immersed in the local culture when visiting a destination. They want to do what the locals do and eat where locals eat. Airbnb Experiences are offering a solution where travellers can book a local experience with a destination native.

Adrenaline pumping activities continue to grow with two new generations who are keen to push their limits. Adventure destinations such as Area 47 in Austria, Queenstown New Zealand, and Interlaken Switzerland are booked for the variety of action packed activities on offer.

"Our guests are looking for adventure, getting the local experience, and small group tours. They’re travellers, not tourists".
– GOECCO Iceland tours

There is a shift with multi-day tours and activities being booked further in advance and being a preferred option for travellers. Convenience is a key selling point as travellers no longer need to spend time planning various activities.

Walking tours are still one of the leading experiences for anyone visiting a new location. They are a great opportunity to find your bearing, meet other travellers and have all their questions answered by a destination expert.

"Usually, our guests are seeking the “must dos” in Switzerland. Our customer base is 40% Asian with the biggest group from India (25%), almost 30% from the US, 10% GCC, 10% from Australia/NZ, 8% from Latin America, and 8% from Europe. People come to us for stunning nature and to enjoy seeing must-dos that they can go back and tell their friends about. There are of course many other reasons too. Some come for the shopping, others want a more educational tour and others want some serious adventure… There really is a bit of everything!"
– Best of Switzerland Tours

In 2017, TrekkSoft processed over 1 million bookings and as of August 2018, together with our customers, we’re set to surpass this number by the end of 2018. With all these bookings made via TrekkSoft, we’ve been able to gather a lot of insightful data to share with you.

According to TrekkSoft booking data:

The use of online travel agents is growing

Back in 2016, we ran our very first distribution survey. Of the 41.3% of business (out of 209 participants) who sell their tours on OTAs, Viator was the leading OTA of choice, followed by Expedia and Get Your Guide. Not much has changed since then.

In our 2018 Tourism Survey, 39% of participants selected that last minute bookings had been a common trend for their business. TrekkSoft booking data shows that reservations for tours and activities which last 1 to 3 hours tend to be booked in-destination or just before arrival. Multi-day tours and activities however, are made in advance or upon arriving at the destination.

Research claimed that 2016 was a “slow year” for China’s outbound tourism, as only 122 million trips were taken. In 2017, China Outbound Tourism Research Institute (COTRI) reported that 145 million outbound trips were made, with 69.4 million (48%) of these heading to Taiwan, Hong Kong and Macau, while the remaining 75.6 million (52%) travellers exploring the rest of the world. In 2018, experts predict that this statistic will grow to a mind-blowing 160 million travellers, a 10.3% growth from 2017. Meanwhile, Morgan Stanley Research expect outbound travel to grow by 14%.

Globally, Travel China Guide reports the following to be the top destination for Chinese travellers:

Download the report today and get the latest data-driven insights and advice from industry experts.

Get your Trend Report here

In 2017, Spain, which has only 47 million residents, welcomed 82 million tourists, up from 75.3 million in 2016. The tourism industry is now the biggest employer in Spain, with more than 2.65 million people reportedly employed in the sector as of Spring 2018. The Spanish prime minister also announced that ‘tourism now provides 11% of Spain’s gross domestic product, rising 12% to 87 billion Euros in 2017.’

Catalonia tends to welcome the highest number of tourists in Spain. In 2017, this included 19 million foreigners and five million Spaniards. Due to tourism success in the region, Catalonia employs over 450,000 workers in the sector.

Andalusia comes in second place for popularity for a sun and sea holiday.
TurEspaña, the Spanish state tourism agency, created a marketing strategy for 2018-2020 with a focus on developing “international tourism of quality” and drawing “cosmopolitan tourists”. This strategy was created in an attempt to move Spain away it’s reputation of being a party town with low tourist spend, youth drinking and excessive nightlife.

In 2018, the INE (Spain’s National Institute of Statistics) reported that Madrid had a 6.7% increase in visitors in July, compared to a drop in beach destinations such as the Balearics, Catalonia and Andalusia. Interestingly, Madrid currently has over 400,000 people in tourism, which is the same as the total in the Balearic and Canary Islands.

Valencia, a popular destination for British, Italian and Dutch tourists, welcomed over 100,000 British tourists alone in 2017, a year on year increase of 14.2%. This popularity has continued to grow in 2018 due to multiple flight paths from easyJet and Ryanair with direct routes from London, Glasgow and Edinburgh.

The idea of “Made in Italy”, where a product with distinctive traits of quality, beauty and creativity has always fascinated millions over the world, drawing them to visit Italy. The country welcomed 58.7 million foreign travellers in 2017, an increase of 11.8% compared to 2016. This is the highest rate of increase among the top five European countries. The ENIT 2016-2018 Three-Year Plan also emphasised that foreign tourists now account for around 50% of arrivals in Italy

Solo travellers are not who you think they are

We spoke about female solo travel as a trend in our Travel Trend Report 2018. Today, solo travel has extended across all generations and to many destinations.

Read what to expect in our Travel Trends Report 2019

One unique travel trend that seems to attract Millennials is surprise holidays. Here, travellers book a package holiday without prior knowledge of where they will go, only when. This travel trend is a hit with those who are keen to explore new places around the world, without the hassle of research and booking their own itineraries..

Srprs.me is a travel agent that organises surprise holidays for travellers. Prospective travellers visit the company’s website and select their holiday criteria. Once complete, they are shown a price tariff of what their trip will cost per day. After uploading personal and payment details they are booked. To a ‘destination unknown!’

“People book with us mostly for the surprise, but also because of how easy it is. People don’t have to arrange things themselves and can just let us do the work.”

Who are our tour guides?

For operators, finding a guide who has the right balance of experience, passion and reliability isn’t easy. Most experienced guides are seasonal travellers themselves and new guides need experience to learn from. In this chapter, we will find out more about the people who are the face of the business.

For our data, we draw insights from 2018 Tourism Survey once more, based on the answers from 786 tour & activity operators located in 112 countries worldwide with approximately 7,225 tour guides.

What type of staff are hired?

From the results we can see that most permanent employees of tour and activity companies tend to work part-time hours, with a lower number of full-time base staff. This is usually due to seasonality, and also that most companies in this sector are small, run by one or two full-time staff.

“For us, the most important thing is to have tour guides who are engaging, can connect with people and can tell a story in an interesting way. We know that most people can learn historical facts, but not everyone can share history and stories in a way that keeps people completely engaged for 2.5 (or more) hours”

Check out our most recent writing on travel trends 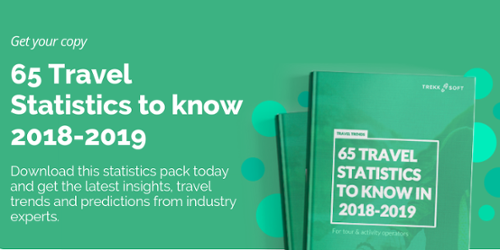